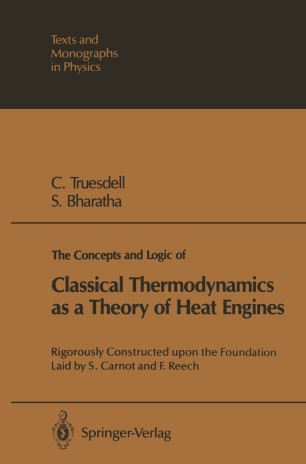 Rigorously Constructed upon the Foundation Laid by S. Carnot and F. Reech

Mon but n'a jamais be de m'occuper des ces matieres comme physicien, mais seulement comme /ogicien ... F. REECH, 1856 I do not think it possible to write the history of a science until that science itself shall have been understood, thanks to a clear, explicit, and decent logical structure. The exuberance of dim, involute, and undisciplined his­ torical essays upon classical thermodynamics reflects the confusion of the theory itself. Thermodynamics, despite its long history, has never had the benefit of a magisterial synthesis like that which EULER gave to hydro­ dynamics in 1757 or that which MAXWELL gave to electromagnetism in 1873; the expositions in the works of discovery in thermodynamics stand a pole apart from the pellucid directness of the notes in which CAUCHY presented his creation and development of the theory of elasticity from 1822 to 1845. Thermodynamics was born in obscurity and disorder, not to say confusion, and there the common presentations of it have remained. With this tractate I aim to provide a simple logical structure for the classical thermodynamics of homogeneous fluid bodies. Like any logical structure, it is only one of many possible ones. I think it is as simple and pretty as can be.