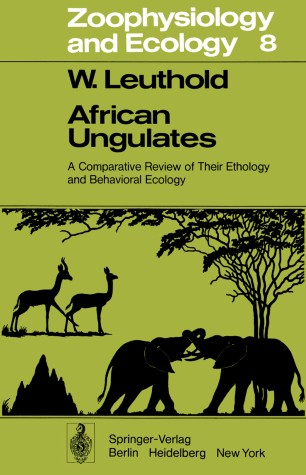 A Comparative Review of Their Ethology and Behavioral Ecology

Part of the Zoophysiology and Ecology book series (ZOOPHYSIOLOGY, volume 8)

This book has been written mostly within sight of wild African ungulates, at the research center in Tsavo East National Park, V oi, Kenya. While this had many positive aspects, there were also a few drawbacks. The main one of these is the fact that Voi is not exactly at the hub of scientific activity, even if we restrict ourselves to African ungulates. Thus, whereas I had felt initially that I was sufficiently familiar with ethological work on these animals to write a useful review, it soon became woefully evident that this assumption was erroneous. Over the last few years studies on African ungulates have pro­ liferated and results are being published in journals almost all over the world. My location in East Africa was sometimes less than ideal with respect to access to the most recent literature, and I depended to a considerable extent on the goodwill of colleagues in giving or lending me relevant papers. I am happy to report that I received a great deal of support and cooperation in this respect. Nevertheless, I may have over­ looked some important papers inadvertently; their authors should not feel slighted by such omissions, which only reflect availability of literature to me. Readers may also notice a considerable geographical bias in favor of East Africa, at the expense of other African regions, particularly South Africa.