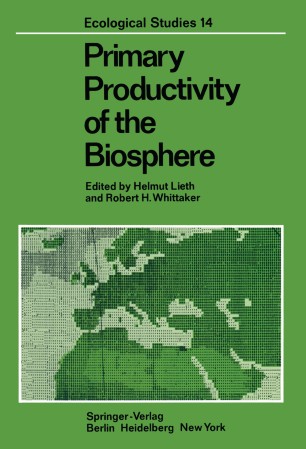 Primary Productivity of the Biosphere

The period since World War II, and especially the last decade influenced by the International Biological Program, has seen enormous growth in research on the function of ecosystems. The same period has seen an exponential' rise in environmental problems including the capacity of the Earth to support man's population. The concern extends to man's effects on the "biosphere"-the film of living organisms on the Earth's surface that supports man. The common theme of ecologic research and environmental concerns is primary production­ the binding of sunlight energy into organic matter by plants that supports all life. Many results from the IBP remain to be synthesized, but enough data are available from that program and other research to develop a convincing sum­ mary of the primary production of the biosphere-the purpose of this book. The book had its origin in the parallel interests of the two editors and Gene E. Likens, which led them to prepare a symposium on the topic at the Second Biological Congress of the American Institute of Biological Sciences in Miami, Florida, October 24, 1971. Revisions of the papers presented at that symposium appear as Chapters 2, 8, 9, 10, and 15 in this book. We have added other chapters that complement this core; these include discussion and evaluation of methods for measuring productivity and regional production, current findings on tropical productivity, and models of primary productivity.