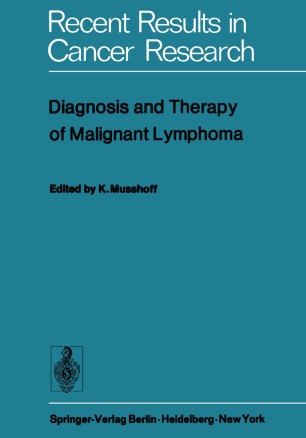 Diagnosis and Therapy of Malignant Lymphoma

K. MUSSHOFF The group of diseases known as malignant lymphomas are, for a number of reasons, of equal interest to theoretical and clinical medicine. New findings in the fields of virology and immunology could conceivably shed some light on the so far unknown etiology of malignant lymphomas. A viral etiology could explain many of the dis­ parate findings with such a puzzling disease as lymphogranulomatosis, which shows both all the signs of malignancy, such as the characteristic Reed-Sternberg and Hodgkin cells and chromosome abnormalities, and those of an inflammatory disease, i.e. typical changes in the blood count and bone marrow and in the distribution of serum proteins. So far we have not been able to identify the etiology of this disease. However, clinical observations and pathomorphological investigations involving a joint effort by different branches of medicine have brought us closer to an understanding of the clinical picture. Descriptive anatomy has given us a clear picture of the regional distribution of the lymphatic system, which has long been neglected in the past. The introductory paper by Dr. S. KUBIK (Zurich), who has made valuable contributions to our knowl­ edge of the anatomy of the lymphatic system, deals with this subject.