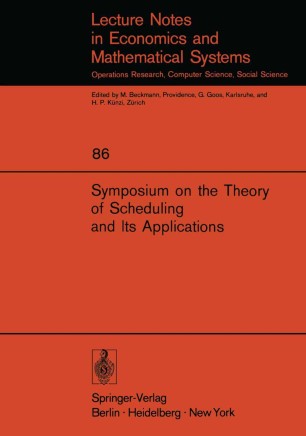 Symposium on the Theory of Scheduling and Its Applications

The theory of scheduling is receiving increased emphasis in research and practice for at least three good reasons. F~~t, the management of large scale projects resolves itself, in the final analysis, into problems of scheduling interacting activities subject to limited resources. Second, a great deal of "fat" that used to exist in the past in production, distribution, and service systems is eliminated, thanks to tighter managerial controls in information systems, in financial management, in logistics, and in many other facets of industrial enterprises and military installations. Tighter scheduling methods are therefore called for. Thi~d, the study of scheduling problems involves the study of combina­ torial problems and optimization over discrete spaces which represent a radical, and interesting, departure from classical mathematics. This area of study has attracted a good number of distinguished researchers, engineers as well as mathematicians. There is a serious attempt to apply known number theory, and perhaps develop new theory, that would cope with the new problems. The computer enters the picture in novel and ingenious ways, which has not been possible before; etc. To those workinQ in the area, whether in theory or in practice, progress proceeds at an exhilarating pace, with new mathematical structures and computational approaches being continuously introduced to model and solve the problems in novel, and oftentimes ingenious ways.