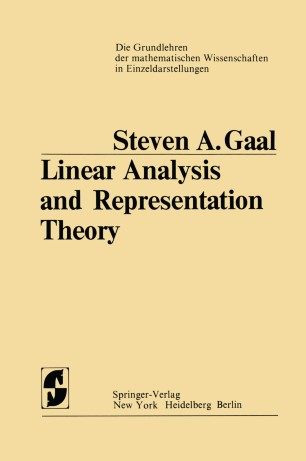 In an age when more and more items. are made to be quickly disposable or soon become obsolete due to either progress or other man caused reasons it seems almost anachronistic to write a book in the classical sense. A mathematics book becomes an indespensible companion, if it is worthy of such a relation, not by being rapidly read from cover to cover but by frequent browsing, consultation and other occasional use. While trying to create such a work I tried not to be encyclopedic but rather select only those parts of each chosen topic which I could present clearly and accurately in a formulation which is likely to last. The material I chose is all mathematics which is interesting and important both for the mathematician and to a large extent also for the mathematical physicist. I regret that at present I could not give a similar account on direct integrals and the representation theory of certain classes of Lie groups. I carefully kept the level of presentation throughout the whole book as uniform as possible. Certain introductory sections are kept shorter and are perhaps slightly more detailed in order to help the newcomer prog­ ress with it at the same rate as the more experienced person is going to proceed with his study of the details.