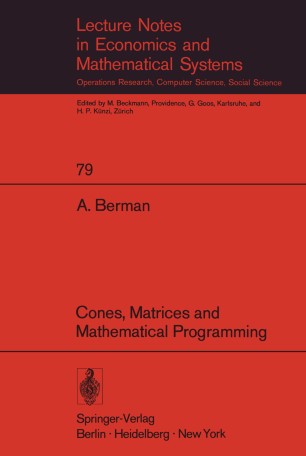 This monograph is a revised set of notes on recent applications of the theory of cones, arising from lectures I gave during my stay at the Centre de recherches mathematiques in Montreal. It consists of three chapters. The first describes the basic theory. The second is devoted to applications to mathematical programming and the third to matrix theory. The second and third chapters are independent. Natural links between them, such as mathematical programming over matrix cones, are only mentioned in passing. The choice of applications described in this paper is a reflection of my p«r9onal interests, for examples, the complementarity problem and iterative methods for singular systems. The paper definitely does not contain all the applications which fit its title. The same remark holds for the list of references. Proofs are omitted or sketched briefly unless they are very simple. However, I have tried to include proofs of results which are not widely available, e.g. results in preprints or reports, and proofs, based on the theory of cones, of classical theorems. This monograph benefited from helpful discussions with professors Abrams, Barker, Cottle, Fan, Plemmons, Schneider, Taussky and Varga.