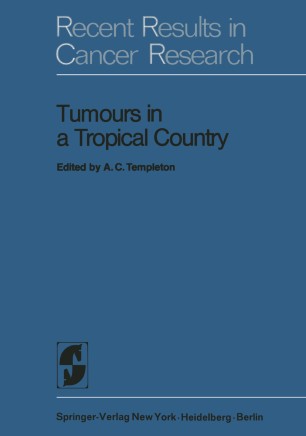 Tumours in a Tropical Country

The geography of medicine is a classical subject that can be studied wherever medicine is practised and the population counted. It has already contributed a great deal to knowledge of the causes of disease and it might be thought that the subject had little more to teach. This, however, is unlikely. First, there are many parts of the world that have only recently been provided with the full range of diagnostic services. Secondly, it is now realised that the ob­ servation that a disease occurs only very rarely under some conditions can be just as important as the observation that it occurs very often under others. Thirdly, the spread of industrializa­ tion has not yet eliminated the wide variety of conditions of life that has been produced by different cultures and different standards of living. We have still an opportunity to determine their effect on the incidence of disease, but not perhaps for long. That an interest in the geography of cancer can pay dividends is shown by many examples ranging from the relationships between cancer of the buccal cavity and chewing habits and between cancer of the lung and smoking, to the current enquiries relating Burkitt's lymphoma to malaria, cancer of the oesophagus to the comsumption of maize beer, cancer of the liver to food contaminated with aflatoxin, and cancer of the large bowel to the dietary content of fibre and fat.