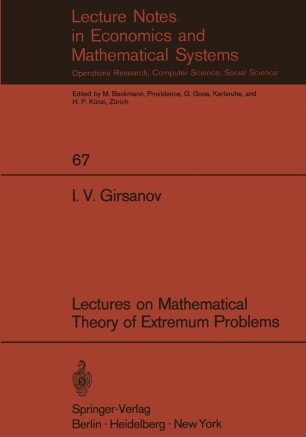 The author of this book, Igor' Vladimirovich Girsanov, was one of the first mathematicians to study general extremum problems and to realize the feasibility and desirability of a unified theory of extremal problems, based on a functional­ analytic approach. He actively advocated this view, and his special course, given at the Faculty of Mechanics and Mathematics of the Moscow State University in 1963 and 1964, was apparently the first systematic exposition of a unified approach to the theory of extremal problems. This approach was based on the ideas of Dubovitskii and Milyutin [1]. The general theory of extremal problems has developed so intensely during the past few years that its basic concepts may now be considered finalized. Nevertheless, as yet the basic results of this new field of mathematics have not been presented in a form accessible to a wide range of readers. (The profound paper of Dubovitskii and Milyutin [2] can hardly be recommended for a first study of the theory, since, in particular, it does not contain proofs of the fundamental theorems. ) Girsanov's book fills this gap. It contains a systematic exposition of the general principles underlying the derivation of necessary and sufficient conditions for an extremum, in a wide variety of problems. Numerous applications are given to specific extremal problems. The main material is preceded by an introductory section in which all prerequisites from functional analysis are presented.