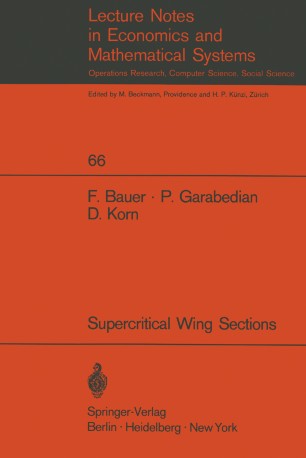 A Theory of Supercritical Wing Sections, with Computer Programs and Examples

At present, there is considerable interest in supercritical wing technology for the development of aircraft designed to fly near the speed of sound. The basic principle is the suppression of boundary layer separation by shifting the shock waves that occur on the wing toward the trailing edge and making them as weak as possible. The purpose of this report is to make available to the engineering public mathematical methods for the design of supercritical wings. These methods depend on the numerical solution of the partial differential equations of two-dimensional gas dynamics. The main contribution is a computer program for the design of shockless transonic airfoils using the hodograph transformation and analytic continuation into the complex domain. Another contribution is a program for the analysis of transonic flow with shocks past an airfoil at off-design conditions. In our design work we include a turbulent boundary layer correction. Part I of the paper is devoted to a description of the mathemati­ cal theory and need not be studied by those primarily concerned with running the programs. Part II is a manual for users of our programs which is independent of the theoretical part. In Part III and in Appendices II and III we give numerical examples and discuss computa­ tional results. The main substance of the report, however, is contained in the listing of the computer programs themselves in Appendix IV. We have used the Fortran language throughout and we have included numerous comment cards in the listing.