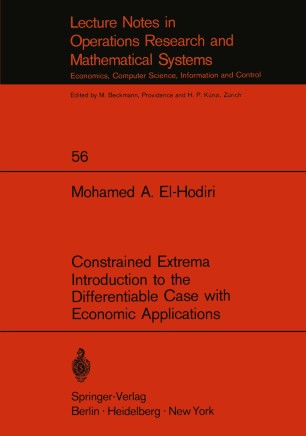 Constrained Extrema Introduction to the Differentiable Case with Economic Applications

These notes are the result of an interrupted sequence of seminars on optimiza­ tion theory with economic applications starting in 1964-1965. This is mentioned by way of explaining the uneven style that pervades them. Lately I have been using the notes for a two semester course on the subject for graduate students in economics. Except for the introductory survey, the notes are intended to provide an appetizer to more sophisticated aspects of optimization theory and economic theory. The notes are divided into three parts. Part I collects most of the results on constrained extremf! of differentiable functionals on finite and not so finite dimensional spaces. It is to be used as a reference and as a place to find credits to various authors whose ideas we report. Part II is concerned with finite dimensional problems and is written in detail. Needless to say, my contributions are marginal. The economic examples are well known and are presented by way of illustrating the theory. Part III is devoted to variational problems leading to a discussion of some optimal control problems. There is a vast amount of literature on these problems and I tried to limit my intrusions to explaining some of the obvious steps that are usually left out. I have borrowed heavily from Akhiezer [ 1], Berkovitz [ 7], Bliss [lOJ and Pars [40J. The economic applications represent some of my work and are presented in the spirit of illustration.