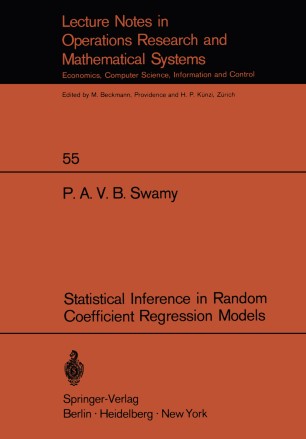 This short monograph which presents a unified treatment of the theory of estimating an economic relationship from a time series of cross-sections, is based on my Ph. D. dissertation submitted to the University of Wisconsin, Madison. To the material developed for that purpose, I have added the substance of two subsequent papers: "Efficient methods of estimating a regression equation with equi-correlated disturbances", and "The exact finite sample properties of estimators of coefficients in error components regression models" (with Arora) which form the basis for Chapters 11 and III respectively. One way of increasing the amount of statistical information is to assemble the cross-sections of successive years. To analyze such a body of data the traditional linear regression model is not appropriate and we have to introduce some additional complications and assumptions due to the hetero­ geneity of behavior among individuals. These complications have been discussed in this monograph. Limitations of economic data, particularly their non-experimental nature, do not permit us to know a priori the correct specification of a model. I have considered several different sets of assumptionR about the stability of coeffi­ cients and error variances across individuals and developed appropriate inference procedures. I have considered only those sets of assumptions which lead to opera­ tional procedures. Following the suggestions of Kuh, Klein and Zellner, I have adopted the linear regression models with some or all of their coefficients varying randomly across individuals.