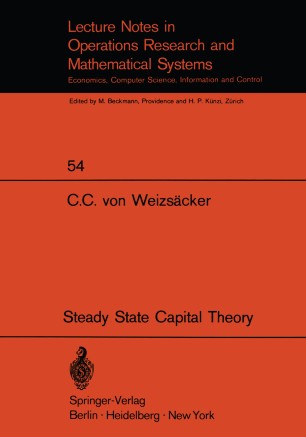 The following lecture notes were written shortly after I gave a course on capital theory in the winter-semester 1970/71 at the Univer­ sity of Heidelberg. While the general line of the argument is similar to the one in the course, I have modified and added a large number' of specific points in the process of writing the English version. I should like to emphasize the narrow limitations of the material covered in these notes. I have completely concentrated on steady states of stationary and exponentially growing economies, even up to the point where there is the danger of misleading the reader1 I have done this for several reasons. Other activities have not left me with a sufficient amount of time to be able to find the unifying principle of analysis and mode of presentation for the dynamic aspects of capi­ tal theory which would have made it worthwhile to add a sizeable book to the large body of literature in this field. On the other hand over the last couple of years I have become increasingly aware that some of the results in steady state capital theory (which could be derived without too much mathematical effort) are of relevance in present day dis­ cussions about the political role of economic theory and the relative merits of orthodox and radical economics. Also these results seemed not to be known by' mO$ of the participants in these discussions.