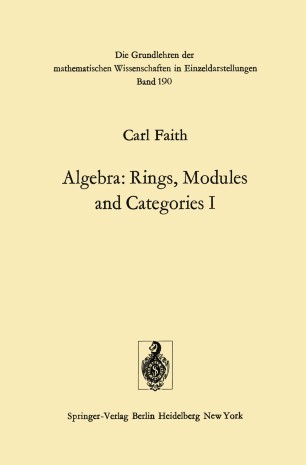 Rings, Modules and Categories I

VI of Oregon lectures in 1962, Bass gave simplified proofs of a number of "Morita Theorems", incorporating ideas of Chase and Schanuel. One of the Morita theorems characterizes when there is an equivalence of categories mod-A R::! mod-B for two rings A and B. Morita's solution organizes ideas so efficiently that the classical Wedderburn-Artin theorem is a simple consequence, and moreover, a similarity class [AJ in the Brauer group Br(k) of Azumaya algebras over a commutative ring k consists of all algebras B such that the corresponding categories mod-A and mod-B consisting of k-linear morphisms are equivalent by a k-linear functor. (For fields, Br(k) consists of similarity classes of simple central algebras, and for arbitrary commutative k, this is subsumed under the Azumaya [51]1 and Auslander-Goldman [60J Brauer group. ) Numerous other instances of a wedding of ring theory and category (albeit a shot­ gun wedding!) are contained in the text. Furthermore, in. my attempt to further simplify proofs, notably to eliminate the need for tensor products in Bass's exposition, I uncovered a vein of ideas and new theorems lying wholely within ring theory. This constitutes much of Chapter 4 -the Morita theorem is Theorem 4. 29-and the basis for it is a corre­ spondence theorem for projective modules (Theorem 4. 7) suggested by the Morita context. As a by-product, this provides foundation for a rather complete theory of simple Noetherian rings-but more about this in the introduction.