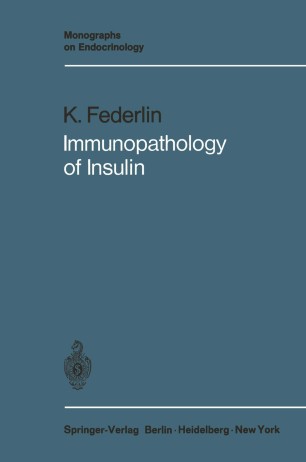 Part of the Monographs on Endocrinology book series (ENDOCRINOLOGY, volume 6)

Soon after the discovery of insulin in 1922, it became clear that the use of this hormone in the treatment of diabetics is often accom­ panied by allergy. In 1956 it became possible to determine quantita­ tively the insulin-binding antibodies which are responsible for the resistance to insulin. The methods developed since then make it possible to measure minute amounts of the pancreatic hormone in blood and extracellular fluids. There have been many attempts to relate insulin allergy and in­ sulin resistance to the primary, secondary or tertiary structure of the or B chains, or both, and more recently, to the proinsulin which is A present in all commercial preparations of insulin, i. e. to the species­ specific structure of the C peptide. In the great majority of papers dealing either with the immunogenic and antigenic properties of in­ sulin or with the relevant antibodies, the discussion has been restricted to the humoral antibodies. The existence of a brief period of delayed local allergy resulting from the cellular immune response has more or less escaped attention. It is specifically this period of delayed allergy that attracted the interest of Dr. FEDERLIN and his colleagues. Making use of immuno­ histological and other techniques which are rarely employed in clinical observation, and with the help of experiments on animals, Dr. FEDERLIN traces the course of insulin allergy from cellular immunity, through the production of humoral antibodies by the insulin-binding cells of the circulation, to the sessile immunological apparatus.