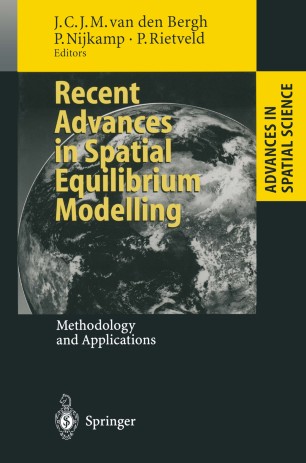 Prices and quantities of both stock and flow variables in an economic system are decisively influenced by their spatial coordinates. Any equilibrium state also mirrors the underlying spatial structure and a tatonnement process also incorporates the spatial ramifications of consumer and producer behaviour. The recognition ofthe spatial element in the formation of a general equilibrium in a complex space-economy already dates back to early work of LOsch, Isard and Samuelson, but it reached a stage of maturity thanks to the new inroads made by T. Takayama. This book is devoted to spatial economic equilibrium (SPE) analysis and is meant to pay homage to the founding father of modern spatial economic thinking, Professor Takayama. This book witnesses his great talents in clear and rigorous economic thinking regarding an area where for decades many economists have been groping in the dark. Everybody who wants to study the phenomenon of spatial economic equilibrium will necessarily come across Takayama's work, but this necessity is at the same time a great pleasure. Studying his work means a personal scientific enrichment in a field which is still not completely explored. The present volume brings together recent contributions to spatial equilibrium analysis, written by friends and colleagues of Takayama. The structure of the book is based on four main uses of spatial equilibrium models: (i) the imbedding of spatial flows in the economic environment, related to e.g.