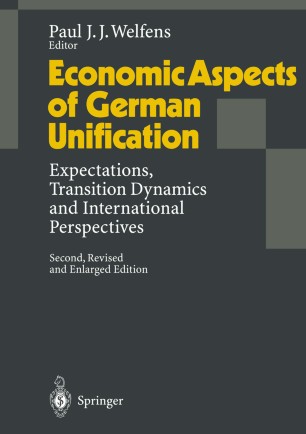 Paul J. J. Welfens The editor is pleased to present a second edition of Economic Aspects of German Unification which includes new chapters and several postscripts. Almost five years after unification output in the ex-GDR is back to its 1989 level. Due to a massive intra-German resource transfer consumption per capita in eastern Germany has not fallen as much as output and employment which reduced by one-fifth within three years. Given high West German transfers which represented about 5% of West German GDP and more than 50% of East German GDP the fall of industrial output could have been much stronger than had politically been feasible. Hence structural change necessary for productivity growth was dramatic in the ex-GDR where the goods producing sector (manufacturing, mining, energy and construction) strongly changed its proportions; within four years construction almost doubled, and the share of investment goods production reduced by 10 percentage points between 1990 and 1994 and is· now down to 21. 1 %. Mining lost two-thirds of its share in the producing sector which itself was reduced relative to GDP. The share of the services industry increased by 5 percentage points between 1991 and 1994, but with a share of 27. 7% in East Germany's GDP it was still about 9 percentage points lower than in western Germany. By contrast, government accounted for 20. 9% of GDP in eastern Germany, but for only 13. 2% in western Germany.