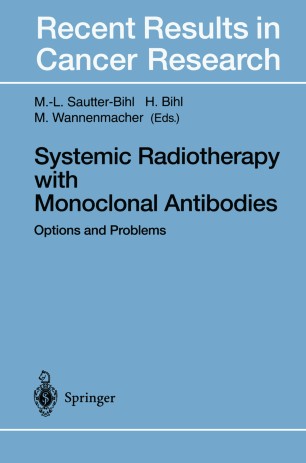 Almost a century ago Paul Ehrlich introduced the "magic bullet" concept of targeting therapeutic agents to specific tissues in order to reduce systemic toxicity. Due to the advances in hybridoma technology in the 1980s, monoclonal antibodies (MAbs) with their exquisite affinity to tumor antigens have become powerful tools in the treatment of cancer, especially when linked to therapeutic agents such as radionuclides, drugs, toxins, or enzymes. It can now be expected that such agents will lead to new cancer treatments with high therapeutic success rates. However, there are major problems in developing this therapeutic concept to a routine treatment modality. This is partly due to factors such as heterogenous distribution of tumor antigens, insufficient blood supply of tumors, high interstitial pressure, and the large interstitial space that antibodies have to traverse. This book is focused on the development in radio immunotherapy (RIT) using radio­ labeled monoclonal antibodies as tumoritoxic agents. This area of research has attracted the interest of clinicians and scientists from many different disciplines. It is now clear that the full potential of RIT can only be realized through the concerted efforts of laboratory scientists (molecular biologists, cell physiologists, chemists, radiation physicists, and biologists) and cancer clinicians in nuclear medicine, radiooncology, and internal oncology.