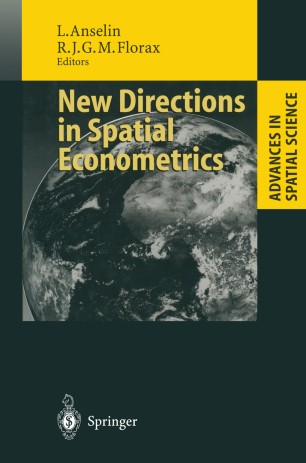 The field of spatial econometrics, which is concerned with statistical and econo­ metric techniques to be used to handle spatial effects in multiregional models, was first touched upon in the 1950s. It was given its name in the early 70s by Jean Paelinck and has expanded since. Its development can be monitored in various monographs that have been published since, starting with the seminal work by Andrew Cliff and Keith Ord. Also, the wide array of journals in which contributions to spatial econometrics have been published, shows that the relevance of the field is not restricted to regional science, but extends to geography, spatial statistics, biology, psychology, political science and other social sciences. This volume contains a collection of papers that were presented at special sessions on spatial econometrics organized in the context of the European and North American conferences of the Regional Science Association International, that took place in Louvain la Neuve (August 25-28,1992) and in Houston (November 11-14, 1993), respectively. Apart from these conference papers some contributions were written especially for this volume. The central idea of this book is to communicate the state of the art of spatial econometrics and to offer a number of new directions for future research. In order to do so, the editors sought contributions of leading scholars currently active in this field.