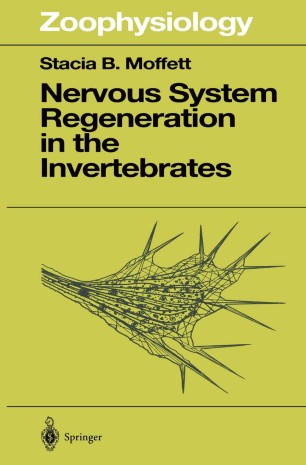 Nervous System Regeneration in the Invertebrates

Invertebrate animals represent a diversity of solutions to life's challenges. Success in a wide range of environments has been achieved by an almost bewildering range of invertebrate body forms. These body forms are reflected in the wonderful diversity of their nervous systems. Despite this apparent diversity, studies of the development of invertebrates and vertebrates are yielding common themes at the molecular level. Likewise, the phenome­ non of neural regeneration is based upon properties intrinsic to neurons and responses to a remarkably conserved chemical lan­ guage. This monograph focuses on the diversity and commonal­ ity of responses to neural injury. The rough and tumble of life may frequently damage some part of the body, particularly the appendages or sensory sys­ tems. The nervous system is usually involved in repair of other body systems and often may itself require repair. Some animals are particularly successful in regenerating the nervous system or body parts. We particularly marvel at these feats of regeneration because we human beings are not particularly successful, despite our relatively long life and the advantages that would seem to accrue from such repair. It is no wonder that we would hope to learn the secrets of the more successful animals and strive to emulate them! Mechanisms of neural regeneration are often more acces­ sible in invertebrates than in vertebrates because questions of specificity are more easily addressed using the identifiable neu­ rons of the relatively simpler nervous systems of some inverte­ brates.

"...an excellent and long-overdue summary of cell-body and axonal regeneration of neurons in many invertebrate phyla." TINS
Buy options