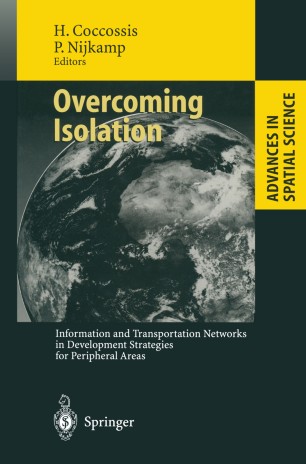 Information and Transportation Networks in Development Strategies for Peripheral Areas

As European countries pursue a common effort towards establishing a European Union, various isolated -and consequently disadvantaged -regions are likely to face increasing competitive pressures due to their peripheral location. To assist such areas, regional, national and supranational bodies put much effort into developing transport and communication networks and linkages in order to ensure that such less favoured areas are better integrated in the broader European social and economic development process. This book addresses the issue of lagging development in various -mainly central and southern - European regions which are in a disadvantageous position as a result of their isolated 10cation.··The persisting problems of social and economic development in several European Union areas (e.g. islands, mountains, border areas) has turned the attention of policy-makers to "the critical importance of transport and (tele)communication linkages. The purpose of the book is to bring into perspective the role of transport and communications in regional policy for peripheral areas. This subject is currently of high priority, since the European Union through the Structural Funds interventions (i.e. the Community Support Frameworks) and the new Cohesion Fund relies heavily on transport and communication infrastructure investments to assist areas which are at a disadvantage due to their peripheral location and isolation. Furthermore, as the Union considers enlargement, some of these issues might be of wide European interest.