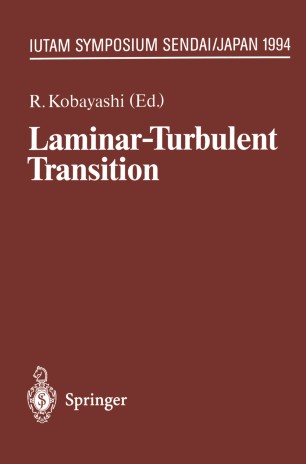 The International Union of Theoretical and Applied Mechanics (IUTAM) decided in 1992 to sponsor the fourth Symposium on Laminar-Turbulent Transition, Sendai/Japan, 1994. The objectives of the present Symposium were to deepen the fundamental knowledge of stability and laminar­ turbulent transition in three-dimensional and compressible flows and to contribute to recent developing technologies in the field. This Symposium followed the three previous IUTAM-Symposia (Stuttgart 1979, Novosibirsk 1984 and Toulouse 1989). The Scientific Committee selected two keynote lectures and 62 technical papers. The Symposium was held on the 5th to 9th of September, 1994, at the Sendai International Center in Sendai. The participants were 82 scientists from 10 countries. The keynote lectures have critically reviewed recent development of researches concerning the laminar-to-turbulent transition phenomena from the fundamental and the application aspects. Many papers presented were concerned about the detailed mechanism of the boundary layer transition (receptivity, secondary instability, turbulent spot and bypass transition). Particular emphasis was further placed on the transition of three-dimensional boundary layers on rotation systems and on swept wings. Attention was also given to compressible hypersonic flows.