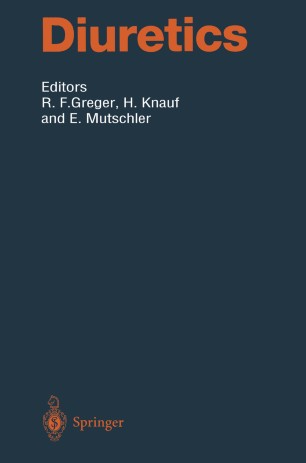 The first edition of this handbook appeared exactly twenty-five years ago. Due to enormous changes in the area of diuretics, the second edition has had to be completely revised. Substantial progress has been made in the functional anatomy of the kidney and in the concepts of how substances and ions are specifically transported across the various nephron segments. No one could have foreseen twenty-five years ago that the late 1980s and the early 1990s have provided us with methodologies to study transport events not only at the single cell level, but even at the level of the single transporter molecule. Many of the transporters for ions and organic substances have been cloned meanwhile by the new methods of molecular biology, and their function can be described more precisely by new transport studies such as the patch-clamp technique. These new insights have also led to a new understanding of how the currently used diuretics act. Just a few months ago, the Na+Cl- co-transporter, which is the target of thiazides, the Na+2CI-K+ co-transporter, which is the target of furosemide, and the amiloride sensitive Na+ channel were cloned. Hence, the targets of diuretics have now been identified at the molecular level. In addition, during the past twenty-five years extensive studies have been performed on the pharmacokinetics of diuretics. We have learned how changes in liver metabolism and altered renal excretion influence the pharmacology of this class of compounds.