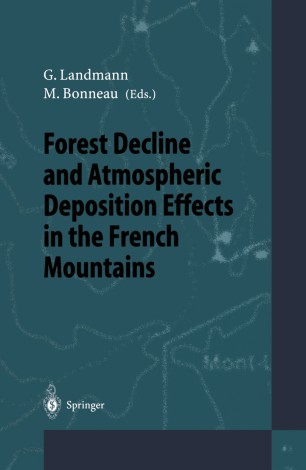 Forest Decline and Atmospheric Deposition Effects in the French Mountains

Forest decline became a matter of public and scientific concern in France in 1983 when conifers in the Vosges mountains were found to exhibit unusual crown deterioration. An impassioned controversy on a supposedly large scale forest health problem was then in full swing in Central Europe. A co-ordinated research programme entitled DEFORPA ("Deperissement des For~ts et Pollution AtmospMrique") was launched in 1984. This programme ran from 1984 to 1991 and a number of projects are still in progress. The Programme was sponsored by three French ministries (Enviroument, Agriculture and Forestry, Research and Technologyl), several state agencies, various regional authorities and the Commission of the European Communities (DO xn and DG VI). Initially, emphasis was solely laid on the understanding of forest decline in the mountainous areas - because damage was most obvious there - in relation to natural and man-made factors. Air pollution was given high but not overwhelming priority. Thus, the DEFORPA Programme was not in its essence a nation-wide assessment of air pollution effects, unlike a number of national acidification research programmes in Europe and North America. During. the programme, however, the areas of concern expanded. In particular, research into water acidification in the Vosges mountains was developed in parallel with the DEFORPA Programme, and possible eutrophication of the ground flora in northeastern France became the subject of new research.