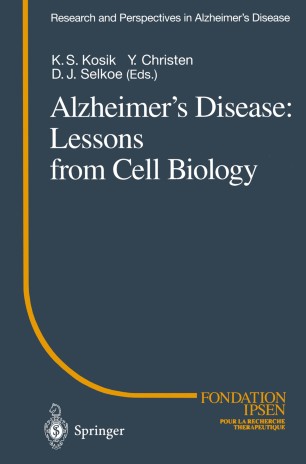 Like the unflinching gaze of Captain Ahab walking the deck of the Pequod, Alzheimer researchers have had their sights fixed firmly on the disease for many years. Now, as this volume amply demonstrates, accomplished researchers from other fields, who have thought deeply about cell biological problems are applying their insights to Alzheimer's disease. The contri­ butions here represent the text versions of the proceedings from the tenth "Colloque medecine et recherche" of the Fondation IPSEN devoted to research on Alzheimer's disease. The symposium, entitled "Alzheimer's Disease: Lessons from Cell Biology" was held in Paris on April 25, 1994. As is apparent from the varied backgrounds of the contributors, the scientific pursuit of Alzheimer's disease has begun to meld with more basic disciplines, particularly cell biology. While on the one hand, new areas of specialization are continuously emerging, the boundaries of older disciplines are increas­ ingly blurred. Perhaps for most of the years since the first descriptions of the disease in 1907, the science of Alzheimer's disease was descriptive, and lay in the province of pathologists. This time period, during which a great deal was learned about the topography of senile plaques and neurofibrillary tangles, culminated with an ultrastructural description of these hallmark structures. The modern era of Alzheimer's disease research opened with the iden­ tification of the component proteins in plaques and tangles.