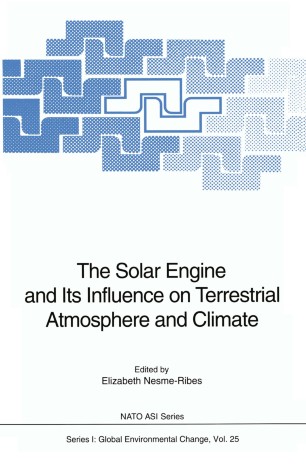 The Solar Engine and Its Influence on Terrestrial Atmosphere and Climate

The message of sunspots from the interior of the Sun to the Earth's climate When Galileo was summoned before the Inquisition on April 12, 1633, the main accusations laid against him concerned the doubts he expressed about Aristotle's theory of the universe. Aristotle's idea was that the Earth was the centre of the cosmos and that all of the stars, including the Sun, turned around it. Moreover, for Aristotle and the world of the Inquisitors, the Sun was a perfect celestial body. Now, Galileo had discovered spots on the Sun. These spots were seen as imperfections, and not just surface markings, but coming from within the Sun. Worse yet, they revolved around the Sun. All this supported the newfangled theory of Copernicus, and undermined a system of thought that had reigned supreme for centuries. Man of science that he was, and a prudent Catholic too, Galileo strived all his life to prove that Copernicus' astronomical concept was compatible with the word of the Bible. He proposed that there were not two truths but a single divine truth. It was just expressed in two different languages : there was the language of the common people, with its imprecision and inconsistencies, but intuitively understandable by everyone; and then there was the precise language of science with its strict regard for observation, which only a chosen few can grasp [L. Geymonat. 1992].