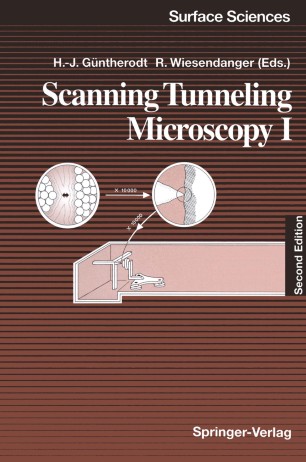 General Principles and Applications to Clean and Absorbate-Covered Surfaces

Since the first edition of "Scanning 'funneling Microscopy I" has been pub­ lished, considerable progress has been made in the application of STM to the various classes of materials treated in this volume, most notably in the field of adsorbates and molecular systems. An update of the most recent develop­ ments will be given in an additional Chapter 9. The editors would like to thank all the contributors who have supplied up­ dating material, and those who have provided us with suggestions for further improvements. We also thank Springer-Verlag for the decision to publish this second edition in paperback, thereby making this book affordable for an even wider circle of readers. Hamburg, July 1994 R. Wiesendanger Preface to the First Edition Since its invention in 1981 by G. Binnig, H. Rohrer and coworkers at the IBM Zurich Research Laboratory, scanning tunneling microscopy (STM) has devel­ oped into an invaluable surface analytical technique allowing the investigation of real-space surface structures at the atomic level. The conceptual simplicity of the STM technique is startling: bringing a sharp needle to within a few Angstroms of the surface of a conducting sample and using the tunneling cur­ rent, which flows on application of a bias voltage, to sense the atomic and elec­ tronic surface structure with atomic resolution! Prior to 1981 considerable scepticism existed as to the practicability of this approach.