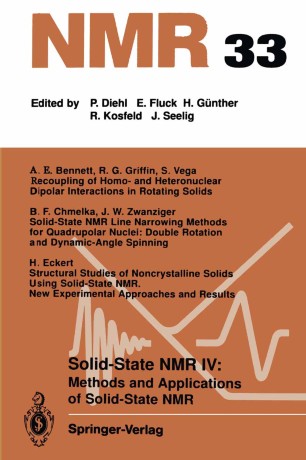 Solid-State NMR is a branch of Nuclear Magnetic Resonance which is presently experiencing a phase of strongly increasing popularity. The most striking evidence is the large number of contributions from Solid-State Resonance at NMR meetings, approaching that ofliquid­ state resonance. Important progress can be observed in the areas of methodological developments and applications to organic and inorganic matter. One volume devoted to more or less one of each of these areas has been published in the preceding three issues. This volume can be considered an addendum to this series. Selected methods and applications of Solid-State NMR are featured in three chapters. The first one treats the recoupling of dipolar interactions in solids, which are averaged by fast sample rotation. Following an introduction to effective Hamiltonians and Floquet theory, different types of experiment such as rotary resonance, dipolar chemical shift correlation spectroscopy, rotational resonance and multipulse recoupling are treated in the powerful Floquet formalism. In the second chapter, the different approaches to line narrowing of quadrupolar nuclei are reviewed in a. consistent formulation of double resonance (DaR) and dynamic angle spinning (DAS). Practical aspects of probe design are considered as well as advanced 2D experiments, sensitivity enhancement techniques, and spinning sideband manipulations. The use of such techniques dramatically increases the number of nuclei which can be probed in high resolution NMR spectroscopy. The final chapter describes new experimental approaches and results of structural studies of noncrystalline solids.