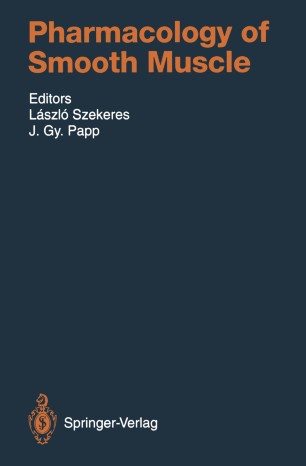 Eighty years have passed since Arthur Heffter, the founder of this handbook series, invited in 1913 eminent scientists from different parts of the world to contribute. At that time 6-10 years were needed to publish the first two volumes, which appeared between 1919 and 1923. During these 80 years, pharmacology as an independent science has undergone tremendouus development, which is reflected truly and com­ prehensively by the ever-growing number of volumes in the now "classic" series of Heffter-Heubner's Handbook of Experimental Pharmacology. The Editorial Board of distinguished, world wide known, experienced pharmaco­ logists assumed responsibility for finding and editing the most current and most interesting topics, keeping in mind that some "evergreen topics" should be brushed up from time to time when sufficient new knowledge has accumulated. In this sense it is surprising that the highly popular topic of ever-growing importance, namely "pharmacology of smooth muscle" has, in the knowl­ edge of the editors of this volume, never been treated as such. Even the of smooth muscle edited by classic volume on the structure and function Biilbring, Brading, Jones and Tomita (Smooth Muscle, 1981) is more than 12 years old. So we think it is justified to say that the present volume really fills a gap. We were lucky to be able to invite eminent scientists working in this field and persuade them of the importance of their contributions, which cover the most important aspects of this wide-ranging topic.