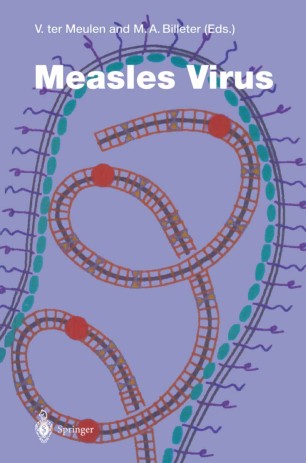 Measles, also called the greatest killer of children in history, still annually affects about 50 million individuals and causes close to a million deaths primarily in developing countries. Before the advent of measles vaccine some 30 years ago, these figures were roughly three times higher. Attenuated measles virus (MV) strains, all quite closely related to the original Edmonston isolate, have a very good record as a safe and highly efficacious vaccine and have brought down the measles toll in industrialized countries to almost negligible levels. However, recent outbreaks in the USA and Europe have again brought the measles problem to public attention. Sadly enough, these outbreaks were more instrumental in inducing activities to drastically reduce and hopefully finally eradicate measles than were the ten thousand times higher number of victims in developing countries. To reach this goal, as detailed in this volume, apparently it is not enough to of the existing vaccine as was the rigorously enforce use case with smallpox eradication: the intricacies of measles disease phenomena, in particular the generalized immune suppression which favors secondary infections, require more basic knowledge of the virus-host interactions and probably the development of new vaccines for special applications such as first immunizations of very young infants in developing countries.

"This volume is eminently readable with concise but state-of-the-art reports on measles research in areas of virology, molecular biology and immunology,...it will be an invaluable source of information for epidemiologists and those working in the measles vaccine research field." - British Journal of Biomedical Sciences
Buy options