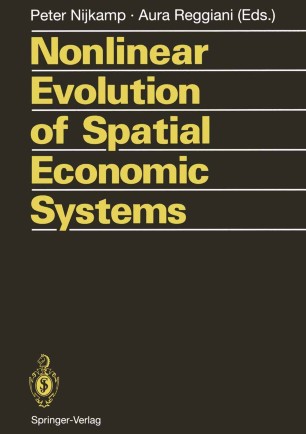 Is our world more dynamic than it used to be in the past? Have phenomena in the social science field become unpredictable? Are chaotic events nowadays occurring more frequently than in the past? Such questions are often raised in popular debates on nonlinear evolution and self-organizing systems. At the same time, many scientists are also raising various intruiging methodological issues. Is it possible to separate deterministic chaos from random disturbances if their trajectories are (almost) similar? Is prediction still possible in a world of chaos (Poincare)? Is it possible to distinguish specification errors from measurement errors in a nonlinear dynamic model? Is evolution a random process? The list of such questions can easily be extended with dozens of others. But despite the myriad of questions on problems of nonlinear evolution, one common trait is evident: in both the natural and the social sciences we are still groping in the dark in areas which are par excellence promising hunting grounds for exploratory and exploratory research, viz. structural grounds in an uncertain nonlinear world. The present book aims at offering a collection of refreshing contributions to the above research issues by focusing attention, in particular on nonlinear dynamic evolution in space at the Netherlands Institute for Advanced Study (NIAS) in Wassenaar, the Netherlands. The Institute has to be thanked for its hospitality and support, reflected inter alia in a workshop at which several of the papers included in this book were discussed.