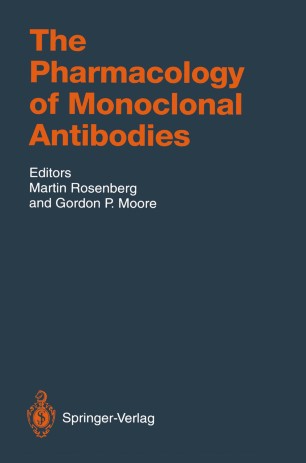 The Pharmacology of Monoclonal Antibodies

It has been almost 20 years since the discovery by Kohler and Milstein of the technology to produce monoclonal antibodies (MAbs), a discovery that promised revolutionary changes in research, clinical diagnosis and human therapy. From today's perspective, it is fair to conclude that this promise has been realized in two areas of the three. As research tools, MAbs have been invaluable: their ability to selectively bind and localize specific antigens, detect and identify new ligands and their receptors, and agonize and/or antagonize specific molecular interactions continues to provide a useful and enabling technology to basic research endeavors. Similarly, MAbs have demonstrated enormous practical impact as diagnostic tools. Recent advances in clinical diagnostic medicine continue to rely heavily on the use of MAb-based reagents for detecting and localizing antigens of clinical import. In contrast, however, MAbs have not proven to have major impact on human disease therapy. With the single exception of an immunosup­ pressive MAb against the T-cell antigen, CD3, MAbs have as yet found few meaningful applications as therapeutic agents. During the 1980s, a set of technologies to clone, modify and express genes encoding MAbs was developed. These breakthroughs permitted MAbs to be genetically engineered which consequently gave them the potential to greatly enhance their therapeutic utility as well as significantly expand their research and diagnostic applications. New MAbs, fragments of MAbs, bispecific MAbs, single-chain MAbs, and fusions of MAbs with other gene products became available for study.