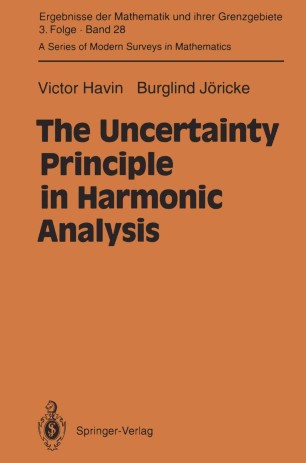 The Uncertainty Principle in Harmonic Analysis

The present book is a collection of variations on a theme which can be summed up as follows: It is impossible for a non-zero function and its Fourier transform to be simultaneously very small. In other words, the approximate equalities x :::::: y and x :::::: fj cannot hold, at the same time and with a high degree of accuracy, unless the functions x and yare identical. Any information gained about x (in the form of a good approximation y) has to be paid for by a corresponding loss of control on x, and vice versa. Such is, roughly speaking, the import of the Uncertainty Principle (or UP for short) referred to in the title ofthis book. That principle has an unmistakable kinship with its namesake in physics - Heisenberg's famous Uncertainty Principle - and may indeed be regarded as providing one of mathematical interpretations for the latter. But we mention these links with Quantum Mechanics and other connections with physics and engineering only for their inspirational value, and hasten to reassure the reader that at no point in this book will he be led beyond the world of purely mathematical facts. Actually, the portion of this world charted in our book is sufficiently vast, even though we confine ourselves to trigonometric Fourier series and integrals (so that "The U. P. in Fourier Analysis" might be a slightly more appropriate title than the one we chose).