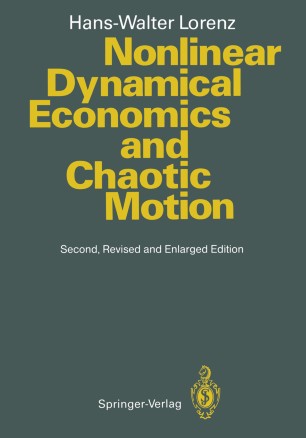 Usually, the first edition of a book still contains a multiplicity of typographic, con­ ceptional, and computational errors even if one believes the opposite at the time of publication. As this book did not represent a counterexample to this rule, the current second edition offers a chance to remove at least the known shortcomings. The book has been partly re-organized. The previously rather long Chapter 4 has been split into two separate chapters dealing with discrete-time and continuous­ time approaches to nonlinear economic dynamics. The short summary of basic properties of linear dynamical systems has been banned to an appendix because the line of thought in the chapter seems to have been unnecessarily interrupted by these technical details and because the book concentrates on nonlinear systems. This appendix, which mainly deals with special formal properties of dynamical sys­ tems, also contains some new material on invariant subspaces and center-manifold reductions. A brief introduction into the theory of lags and operators is followed by a few remarks on the relation between the 'true' properties of dynamical systems and their behavior observable in numerical experiments. Additional changes in the main part of the book include a re-consideration of Popper's determinism vs. inde­ terminism discussion in the light of chaotic properties of deterministic, nonlinear systems in Chapter 1. An investigation of a simultaneous price-quantity adjustment process, a more detailed inquiry into the uniqueness property of limit cycles, and a short presentation of relaxation oscillations are included in Chapter 2.