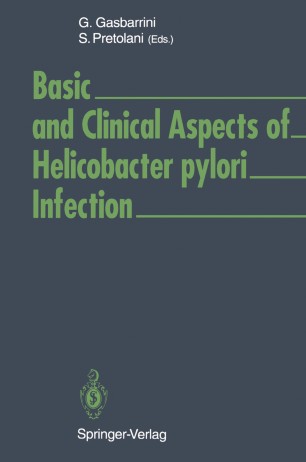 A century ago the Italian pathologist Bizzozero described the relationships between spiral bacteria and the mammalian gastro­ intestinal tract. Since 1982, when Helicobacter pylori was discovered, gastroduodenal disease have been completely revised as a con­ sequence of the results of basic and clinical research in this field. Progress in understanding the pathogenesis of this bacterium has been made by studying H. pylori infection in animal models. More specific diagnostic tools have been developed using new molecular biology techniques. Future trends are directed towards preparing a specific H. pylori vaccine. A new classification for gastritis, the Sydney System, including H. pylori gastritis, was proposed in 1990. As concerns the clinical approach to peptic ulcer disease in the 1990's, the majority of authors agree on the importance of H. pylori eradication. Moreover, recent clinical studies suggest that H. pylori infection can be associated with other gastroduodenal diseases, such as non ulcer dyspepsia and gastric cancer. Multicenter trials to standardize serological methods and evaluate the efficacy of new antimicrobial therapy schedules are planned throughout different European countries. The fourth Workshop of the European Helicobacter Pylori Study Group was held in Bologna, Italy, in November 1991. Two years before Bologna University celebrated its ninth centennial, giving evidence of being the oldest University in the modern world. Thus the H. pylori story that has continued for more than a century has been discussed once again at the University with the oldest tradition in the world.