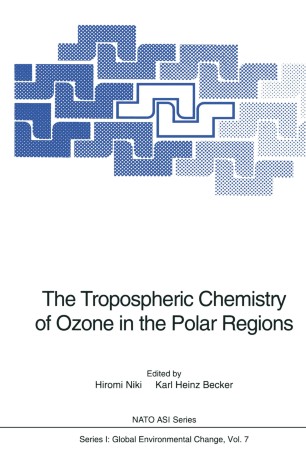 The Tropospheric Chemistry of Ozone in the Polar Regions

The Arctic troposphere (0 to ca. 8 km) plays an important role in environmental concerns for global change. It is a unique chemical reactor influenced by human activity and the Arctic ocean. It is surrounded by industrialized continents that in winter contribute gaseous and particulate pollution (Arctic haze). It is underlain by the flat Arctic ocean from which it is separated by a crack-ridden ice membrane 3 to 4 m thick. Ocean to atmosphere exchange of heat, water vapor and marine biogenic gases influence the composition of the reactor. From September 21 to December 21 to March 21, the region north of the Arctic circle goes from a completely sunlit situation to a completely dark one and then back to light. At the same time the lower troposphere is stably stratified. This hinders vertical mixing. During this light period, surface temperature reaches as low as -40°C. In this environment, chemical reactions involving sunlight are generally much slower than further south. Thus, the abundance of photochemically reactive compounds in the atmosphere can be high prior to polar sunrise. Between complete dark in February and complete light in April, a number of chemical changes in the lower troposphere take place.