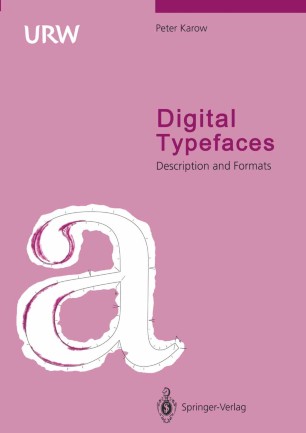 Summary his book was written primarily for people who intend or wish to develop new machines for the output of typefaces. It is practical to categorize equipment into three groups for which digital alphabets are required - 1) display devices, 2) typesetting machines and 3) numerically controlled (NC) machines. Until now, development of typefaces has been overly dependent upon the design of the respective machine on which it was to be used. This need not be the case. Digitization of type should be undertaken in two steps: the preparation of a database using hand-digitization, and the subsequent automatic generation of machine formats by soft­ scanning, through the use of a computer-based program. Digital formats for typefaces are ideally suited to system­ atic ordering, as are coding techniques. In this volume, various formats are investigated, their properties discussed and rela­ tive production requirements analyzed. Appendices provide readers additional information, largely on digital formats for typeface storage introduced by the IKARUS system. This book was composed in Latino type, developed by Hermann Zapf from his Melior for URW in 1990. Compo­ sition was accomplished on a Linotronic 300, as well as on an Agfa 9400 typesetter using PostScript. v Preface Preface his book was brought out by URW Publishers in 1986 with the title «Digital Formats for Typefaces;). It was translated into English in 1987, Japanese in 1989 and French in 1991.