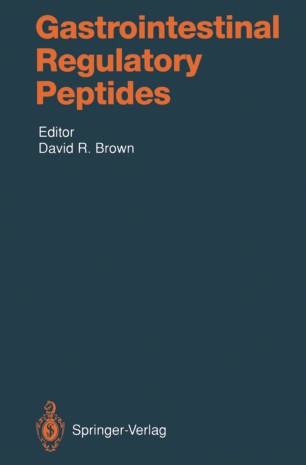 Since the discovery of the pancreatic secretagogue secretin by W. M. BAYLISS and E. H. STARLING at the inception of the twentieth century, intense interest has focused on numerous, continually expanding classes of small peptides which appear to serve as regulatory molecules in the gastrointestinal tract, brain, and other organ systems. Initially, many of these substances were, like secretin, discovered in functional assays as "factors" or "activities" extractable in minute quantities from tissues or tissue fluids. By the middle of the century, advances in biochemical and immunological methods for the purification, characterization, and quantification of biologically active peptides in organ systems, tissues, and body fluids provided further impetus to this field. It was readily appreciated that small, biologically active peptides were particularly abundant in the digestive tract. Many peptides such as vasoactive intestinal peptide, gastrin, and more recently peptide YY and galanin were in fact originally discovered in and isolated from gut tissue. Moreover, these peptides were found to have profound actions on the gastroenteropancreatic system in vivo and in vitro. During the past 2 decades, information on regulatory peptides has burgeoned as a result of technological refinements in the synthesis of peptides, improved methods for detecting and visualizing peptides and their precursors in cells and tissues from a variety of species, advances in the functional assessment of peptide activity, and the application of molecular biological techniques to the char­ acterization of peptide gene structure and expression.