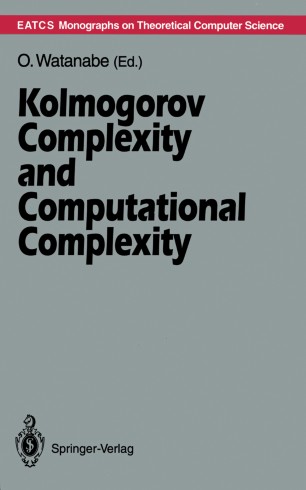 The mathematical theory of computation has given rise to two important ap­ proaches to the informal notion of "complexity": Kolmogorov complexity, usu­ ally a complexity measure for a single object such as a string, a sequence etc., measures the amount of information necessary to describe the object. Compu­ tational complexity, usually a complexity measure for a set of objects, measures the compuational resources necessary to recognize or produce elements of the set. The relation between these two complexity measures has been considered for more than two decades, and may interesting and deep observations have been obtained. In March 1990, the Symposium on Theory and Application of Minimal­ Length Encoding was held at Stanford University as a part of the AAAI 1990 Spring Symposium Series. Some sessions of the symposium were dedicated to Kolmogorov complexity and its relations to the computational complexity the­ ory, and excellent expository talks were given there. Feeling that, due to the importance of the material, some way should be found to share these talks with researchers in the computer science community, I asked the speakers of those sessions to write survey papers based on their talks in the symposium. In response, five speakers from the sessions contributed the papers which appear in this book.