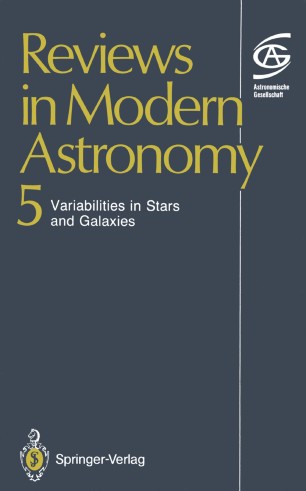 Variabilities in Stars and Galaxies

The International Scientific Spring Meeting of the Astronomische Ge­ sellschaft (AG) held at Bamberg in April 1991 was devoted to "Vari­ abilities in Stars and Galaxies". Time-dependent phenomena are observed in a wide range of as­ tronomical objects. They are caused by different physical mechanisms (for example by pulsation, by accretion, or by dramatic eruptive events in connection with mass outflow) producing observable intensity vari­ ations through all wavelengths. Many of the papers in this volume are concerned with galactic stars showing such behaviour (for ex­ ample cataclysmic variables, symbiotic stars, luminous blue variables (LBVs) and novae). Intrinsic variations of the, magnetic field struc­ ture on observable time scales are, for instance, a peculiarity of cool, solar-like stars and represent a useful tool to study differential rotation and cycles of activity. Recent results on the investigation of gas motions in the inner regions of the Milky Way system, a study of the bipolar galaxy M 82, observations of variable extragalactic radio sources, the variability of emission lines in active galactic nuclei (AGN) as well as continuum variations of quasars and AGN are discussed by several authors. The yearbook series Reviews in Modern Astronomy of the AG to bring the scientific events of the was established in 1988 in order meetings of the society to the attention of the worldwide astronomical community.