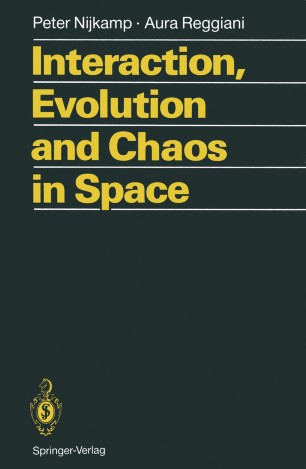 Interaction, Evolution and Chaos in Space

For many decades scholars from various disciplines have been intrigued by the question whether there are unifying principles or models that have a validity in different disciplines. The building of such analytical frameworks bridging the gaps between scientific traditions is a very ambitious task and has not been very successful up till now. In the past - in a static context - several such principles have been defined and advocated at the edge of the natural sciences on the one hand and social sciences (in particular, economics and geography) on the other hand, mainly based on the paradigm of 'social physics'. Some important contributions to the integration of the spatial systems sciences and physics can be found in gravity theory and entropy theory, which have formed the comer stones of interaction models in space. This book is about spatial interaction models. It describes the origin, the history and the correspondence of such models from a 'social physics' perspective. It is emphasized that such models need a clear behavioural underpinning as a sine qua non for a valid use in spatial systems analysis. This view also explains the use of micro-based disaggregate choice models as a tool for analyzing spatial systems. This is mainly analyzed in Part A of this book.