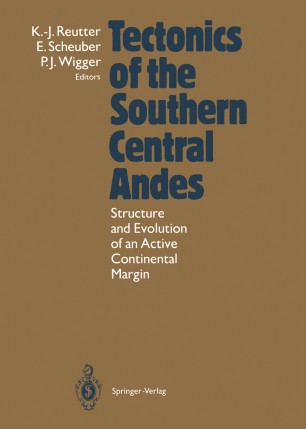 Tectonics of the Southern Central Andes

Structure and Evolution of an Active Continental Margin

together with contributions by invited geoscientists The Central Andes, whose orogenic activity is so impressively documented by recent volcanism and and counterparts from other countries, during a workshop held in Berlin, 23-25 May 1990. A great earthquakes, have always attracted the attention of geoscientists. This interest became even more accen­ number of the papers presented at this workshop are tuated since, a quarter of a century ago, Plate included in this volume. While most of the chapters Tectonics became the basis for the New Global refer regionally to the segment of the southern Andes Tectonics concept, in which this huge mountain range mentioned above, others treat general aspects or deal was the most spectacular example of an active conti­ with Andean regions farther south, thus showing not only that the structures of this mountain range can be nental margin. Thus, in addition to the continuing research work by South American and foreign geo­ followed to more distant parts but also that there are scientists dedicated mostly to regional and economic significant structural variations along strike. problems, a great number of special research pro­ Like other books which originate from workshops grammes were initiated aiming at a better understand­ and are comprised of contributions from many ing of the processes acting at a convergent plate authors, also this one cannot give a complete and margin. well-balanced view of the scientific subject dealt In 1982, the earth science institutes of the Freie with, in this case the southern Central Andes.