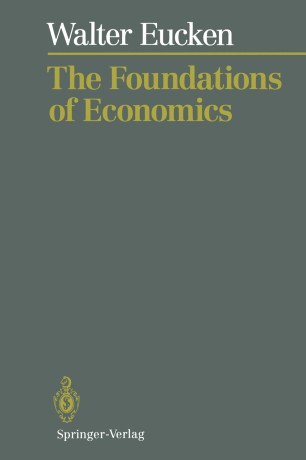 The Foundations of Economics

History and Theory in the Analysis of Economic Reality

THE FIRST GERMAN edition of this book appeared in 1940. Since then the book has gone through five more editions and has been translated into Spanish and Italian. The present English translation is based on the sixth German edition. The author was Professor of Economics at the University of Freiburg, Germany. Professor Eucken was a student at a time when the Historical School dominated the teaching of econo­ mics at the German universities. Although, at the beginning of his career, he did some work along the lines of the Historical School, neither the ~ims nor the methods of historical research the field of economics as practised by the representatives in of the Historical School satisfied him; and the fact that the members of this school were unable to explain the causes of economic events such as the German inflation after World War I was an added reason for him to turn to economic theory. He became, among German economists, the foremost opponent of the Historical School, which he criticised in several publica­ tions. Through his wrItings and his teaching he contributed his share to the revival of interest in economic theory which was noticeable in the 'twenties. And he was one of the few economists left in Germany who helped to keep this interest alive during the 'thirties and during World War II. During this time he published Kapitaltheoretische Untersuchungen (1936), and the present volume, which immediately gave rise to an extensive discussion in German economic journals.