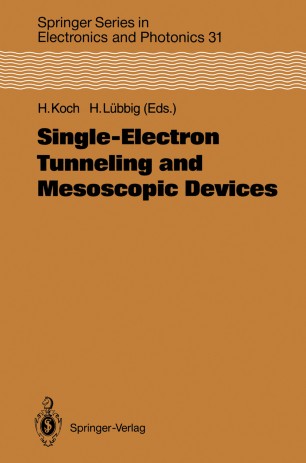 Part of the Springer Series in Electronics and Photonics book series (SSEP, volume 31)

Single-electron tunneling (SET) and related phenomena have recently come to be considered as "hot topics". This also became apparent when we organized the 4th International Conference on Superconducting and Quantum Effect Devices and Their Applications, SQUID'91, which was held June 18-21, 1991, in Berlin, Germany. Impressed by the number of contributions dedicated to the new physics of ultrasmall devices, we deemed it appropriate to devote this volume of the Springer Series in Electronics and Photonics to these specialized proceedings. The other contributions presented at SQUID'91, which are more conventional in character but nevertheless contain excitingly innovative results, are published separately as Volume 64 of the series Springer Proceedings in Physics. At first glance it seems strange that a conference abbreviated SQUID'91 should attract so many papers on non-superconducting devices, and in fact the first SQUID'XX conferences dealt exclusively with the physics and technology of Josephson junctions, SQUIDs and other superconducting devices and their ap­ plications. However, many concepts developed for superconducting devices, like tunneling, flux quantization, and flux-charge conjugation, appeared to be suitable for ultrasmall non-superconducting structures as well, and many researchers in the field of superconducting devices extended their activities accordingly. Thus the extension of the conference programme evolved quite informally. Meanwhile, the meetings established themselves as well-known conference series tradition­ ally appreciated by the SQUID community for its balanced mixture of physics and technology, review and preview. SQUID'XX became a kind of a trademark.