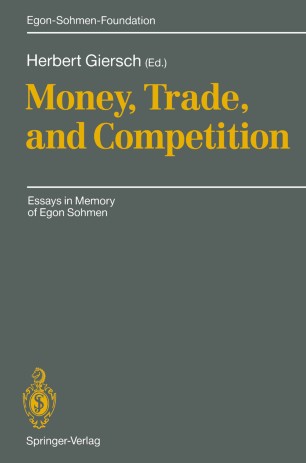 Essays in Memory of Egon Sohmen

On June 1, 1990, Egon Sohmen would have reached the age of 60 had he not suffered from a fatal illness. It demanded his death at the early age of 46. If he were still with us, he would playa prominent role in the current debate on monetary arrangements and on allocation theory, perhaps in­ cluding environmental issues and urban economics. His contributions are well remembered by his colleagues and friends, by his former students, and by many in the economics profession on both sides of the Atlantic. In extrapolating his great achievements as a scholar and teacher beyond the time of his death, one is inclined to suppose that Egon Sohmen's name would figure high on many a list of candidates for honors and awards in the field of international economics. For the reconstruction of economics in the German language area Egon Sohmen was invaluable. Born in Linz (Austria), he studied in Vienna at the Business School (Hochschule fUr Welthandel, now Wirtscha!tsuniversitiit), then went to the US as a Fulbright scholar (1953), returned to Europe to take his doctorate in Tiibingen, Germany, (1954) and crossed the Atlantic again to teach at MIT (1955-58) where he obtained a Ph. D. (1958) under Charlie Kindleberger. He might have stayed permanently in the US, con­ tinuing a career that he started as Assistant Professor at Yale University (1958-61), if the US visa provisions had been applied in a more liberal fashion.