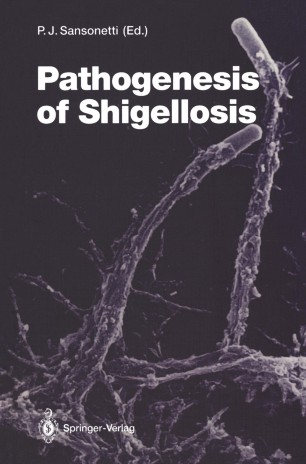 Shigellosis is present all over the world. Anyone traveling in developing countries knows that the control of this invasive disease of the intestine is a priority task for physicians and public health authorities. Victims are essentially young children, and complications such as the hemolytic uremic syndrome make shigellosis a systemic disease rather than simply an infection of the colonic mucosa. However, "Westerners" should not consider shigeJlosis as an unlikely threat of the tropics. The disease arises in industrialized countries as soon as breaches in sanitation appear. A few months ago, at least 500 people developed shigellosis in northern France in an outbreak of Shigella sonnei infection due to accidental contamination of an urban water delivery system. The pathogenesis of shigellosis is an extraordinary topic of research because study of the invasion of the colonic mucosa addresses fundamental questions on. the molecular and cellular mechanisms by which a bacterial pathogen can pene­ trate non phagocytic cells, survive, multiply, spread in the intra­ cellular compartment, and eventually kill host cells. Further development of the infection within subepithelial tissues as well as the mechanisms that contribute to the eradication of this process have barely been studied.