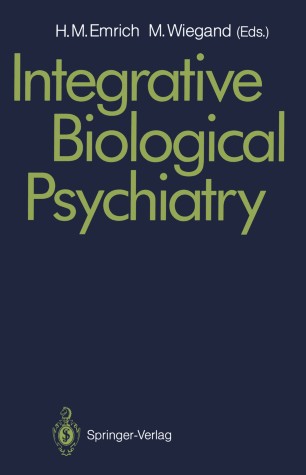 Professor Detlev Ploog On March 19-21, 1989, a symposium entitled "Integrative Biological Psychiatry" was held at the Ringberg Castle (Bavaria) to honor the scientific work of Detlev Ploog, who retired at that time from his position as the Director of the Max Planck Institute of Psychiatry in Munich. The lectures represent an overview of the scientific work conducted at the Max Planck Institute within the recent past and thus also reflect the scientific intentions and research strategies of Detlev Ploog, who brought together extremely divergent tendencies within basic and clinical research and integrated the findings to elucidate new perspectives for fundamental psychiatric problems. His ability to combine topics such as brain and behavior with neuropsychological, neuroethological, psychopharmacological, and behavioral aspects generated a scientific climate in which psychiatric research flourished. The chapters in the present volume represent a documentation of this integrative view on psychiatry, and we, who worked together with Detlev Ploog as his university colleagues at the Ludwig Maximilians University (H. H. ), the Technical University of Munich (H. L. ) and as his successor at the Max Planck Institute (F. H. ) wish him, also after his retirement, continued scientific success, with many additional contributions to modern psychiatry. Hanns Hippius Florian Holsboer Hans Lauter Preface One of the main purposes of science is to elaborate models of natural processes that should be as realistic as possible.