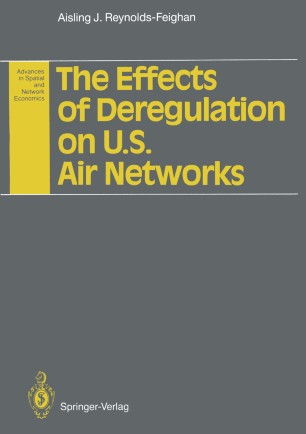 The Effects of Deregulation on U.S. Air Networks

1. 1 A Brief History of U. S. Commercial Aviation Regulation and Deregulation The U. S. commercial aviation industry was regulated by the government for a period of 40 years, beginning in 1938 with. the passing of the Federal Aviation Act, and ending in October 1978 when President Carter signed into law the Airline Deregulation Act (ADA). There were 16 airlines in existence when the Federal Aviation Act was passed in 1938 (the so-called 'trunk lines'). The Act established the Civil Aeronautics Authority (CAA) as the industry's regulatory body. The Act was passed principally because it was felt that the free market, if allowed to continue unregulated for much longer, would put many of these firms into bankruptcy. It is possible therefore to view the CAA of 1938 (re-organized into the Civil Aeronautics Board (CAB) in 1940) as a response to a potential market failure at the time. In the 1930s, few air traffic markets could have efficiently"supported more than one airline operating in the market [Panzar (1980)]. Competition among the carriers was cut-throat, and it was felt that the near bankruptcy of the airlines in the period was caused principally by the competitive bidding system used by the Post Office in allotting airmail subsidies [Keeler (1972), Caves (1962)].