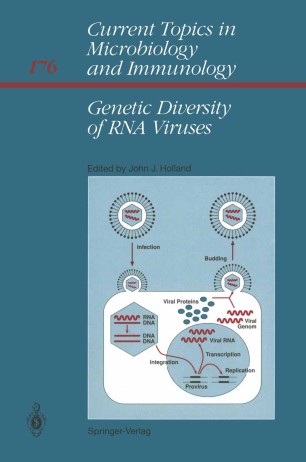 Many RNA viruses have been known for decades to be genetically and biologically quite variable. Some well-known examples are influenza viruses, foot and mouth disease viruses, and Newcastle disease virus. During the past decade, it has become clear that most, it not all. , RNA viruses (riboviruses and retroviruses) are much more mutable than was recognized previously, and that this great mutability generates extremely complex populations consisting of indeterminate mixtures of related variants (Le. , "mutant swarms" or "quasispecies" populations). This is also true of DNA viruses (such as hepatitis DNA genomes via RNA transcripts B virus) which replicate their that are reverse-transcribed back to DNA. This hypermutability of RNA replicons provides great biological adaptability for RNA virus genomes. It also allows (but does not necessitate) RNA viruses, so that they can extremely rapid evolution of evolve over a million times more quickly than their eukaryotic DNA-based hosts. The genetics of RNA replicons is so unusual (and often counterintuitive) that it has many important biological conse­ quences which are neither readily apparent nor widely under­ stood. Failure to understand the distinctive aspects of RNA genetics frequently generates confusion and controversy and can adversely impact vaccine and antiviral drug programs and other applications of medical virology. The 14 chapters in this volume describe advances in a number of significant areas of RNA virus genetics and evolution.