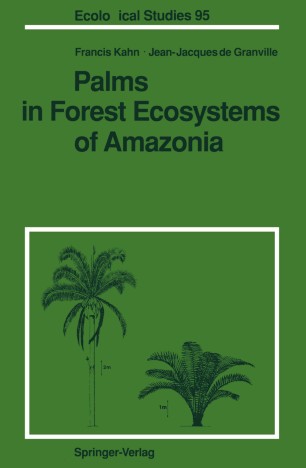 Palms in Forest Ecosystems of Amazonia

Palms are tropical miracles. Heinrich Heine, the German poet, stated "Unter den Palmen wandert man nicht ungestraft", i.e., one does not wander unpunished under the palms. It was Professor H.C.D. de Wit who taught me this in the late 1950s, and it is a pleasure to forward this message to the next generation in such an appropriate book. Both authors, as I know them, will bear the punishment of the palms. They will never be without palm nostalgia if and when living somewhere outside this world's tropical and subtropical palm belt. Palm nostalgia goes further than palms alone. It concerns the landscape, the short but splendid sunsets and last, but not least, the tropical people. Their elegance of living, structured in subtler ways than managers will ever understand, their laughter which may be a more decisive weapon against the troubles besetting the tropics than mere economics, and their unique life force erupting on festive as well as sad occasions under the palms will always remain with those who w3)ldered beneath these trees. I know. I was there.